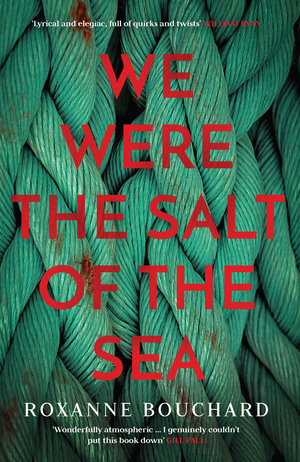 We Were the Salt of the Sea

As Montrealer Catherine Day sets foot in a remote fishing village and starts asking around about her birth mother, the body of a woman dredges up in a fisherman’s nets. Not just any woman, though: Marie Garant, an elusive, nomadic sailor and unbridled beauty who once tied many a man’s heart in knots. Detective Sergeant Joaquin Moralès, newly drafted to the area from the suburbs of Montreal, barely has time to unpack his suitcase before he’s thrown into the deep end of the investigation.
On Quebec’s outlying Gaspé Peninsula, the truth can be slippery, especially down on the fishermen’s wharves. Interviews drift into idle chit-chat, evidence floats off with the tide and the truth lingers in murky waters. It’s enough to make DS Moralès reach straight for a large whisky…
Both a dark and consuming crime thriller and a lyrical, poetic ode to the sea, We Were the Salt of the Sea is a stunning, page-turning novel, from one of the most exciting new names in crime fiction.


‘Colourful, authentic characters with the kind of flavour that can only be inspired by real locals. So good it’ll make you want to pack your bags and drive straight to the seaside’ Journal de Montréal

‘Lyrical and elegiac, full of quirks and twists’ William Ryan

‘An isolated Canadian fishing community, a missing mother, and some lovely prose. Very impressed by this debut so far’ Eva Dolan